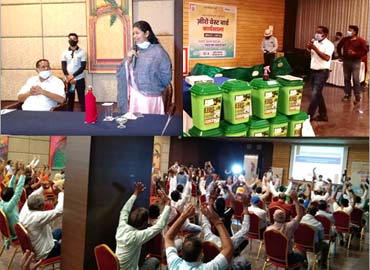 Indore has been ranked cleanest city for the fourth consecutive year and it is all set to top the list again in Swachh Survekshan 2021. Indore Municipal Corporation (IMC), which is known for setting examples before the country in steps for cleanliness, is going all guns blazing to achieve the target of making five ‘Zero Waste Wards’, which will subsequently be scaled up to all the 85 wards in the city.

Feedback Foundation is supporting Indore Municipal Corporation in making Ward No. 32 a ‘Zero Waste Ward’.  In line with this, a workshop was held on 29th September, 2020 in Orion Hall of Brilliant Convention Centre, under the Chairpersonship of Ms. Pratibha Pal, Commissioner of Indore. The participants included the natural leaders and residents of Ward 32. Public Representative, Mr. Munnalal Yadav and other influential leaders were also present. More than 300 enthusiastic participants, eager to make their ward, first zero waste ward, attended the workshop. Ms. Pal, applauded Feedback Foundation for their dedicated efforts, and the residents of Ward 32 for their support and active participation in Swachhta Abhiyan of IMC. She explained the parameters of ‘Zero Waste Ward’ and encouraged the participants to make Ward 32 the first zero waste ward of Indore. The participants have assured that they will go all out and make their ward a ‘Zero Waste Ward’ by 14th November, 2020.