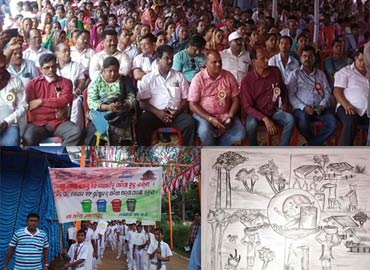 ‘Ma, Baba… Please start segregating waste at home and stop using Plastic’ is the slogan that reverberated in the air of Konark City on 31st August, 2019. Children from 48 schools participated in rallies and raised slogans to spread awareness on segregation of waste at source and harmful effects of polythene. Children across 21 schools were facilitated to put their thoughts on waste reduction and waste management through drawings, which served as a huge motivation for the adults including their parents and citizens.

The mobilization campaign carried out in heritage town Konark was a part of Feedback Foundation’s technical assistance to the Konark NAC and the district administration of Puri to make Konark as the first ‘NOW’ [No Open Waste] heritage city in India through integrated decentralized solid waste management. The preparation of the campaign started seven days ago, with mass mobilization through triggering of different citizen groups such as students, teachers, citizens, natural leaders, members of the self-help groups, representatives of market, hotel, tourist guide and photographer associations.  The event was a great success with more than 2000 participants taking oath at NAC ground to make Konark, the first ‘No Open Waste’ heritage city. Youth and Sports Minister also graced the event with his presence. The aim of the campaign was to create an enabling environment and citizen’s ownership for source segregation of waste and integrated decentralized SWM.