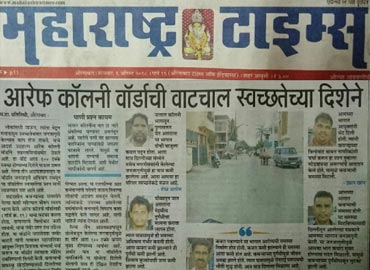 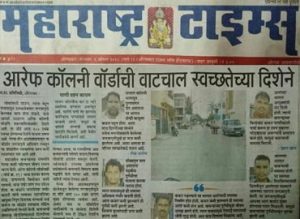 Maharashtra Times representative visited Arif colony and realized that proper awareness can help in achieving anything.He then wrote an article stating Arif colony has set an example before others. The colony is now stepping towards 100% cleanliness. It has successfully achieved it through awareness of Cleanliness and effort of community. Garbage has been a very big issue in the city since last few months which impacted Ward 19 also. Disposal of Waste was a major challenge.  Ward Corporator Mr. JameerQuadri discussed the garbage issue with AMC Commissioner Dr. NipunVinayak and requested to start Cleanliness campaign in the ward. Help of one Delhi based agency (Feedback Foundation)was taken to address the issue of solid waste management. Team members from the agency reached house to house to understand the issues of people. Team then explainedthe importance and the process of waste segregation to the residents, and provided continuous support to the residents as a result Arif Colony is inching towards achieving NOW status.