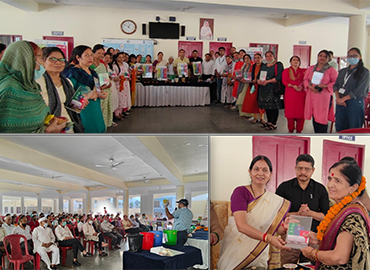 Source Segregation Samman Samaroh was organised on 22nd April 2022 by Feedback Foundation at Someshwar Mandir Marg, Nirankari Bhawan, ward no. 20, Ganga Nagar, under the United Nations Development Programme for Plastic Recycling Management in the presence of Hon’ble Mayor- Mrs. Anita Mamgain, Commissioner- Mr. Girish Chand Gunwant and Ward Councillor (Ward No. 20) – Mrs. Uma Brijpal Rana. In the event, citizens who are segregating their waste and who are making compost of wet waste at home were acknowledged and a token of respect was given to them.  A triggering meeting was also conducted during the event where everyone present was informed about source segregation of waste and its importance. Everyone present was also motivated to segregate their waste and to start home composting.