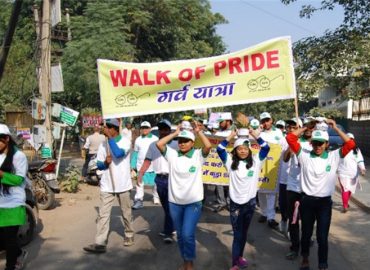 26th November 2017 is a Red Letter Day for the people of Ward 2 of Gurugram. On this day, the ward was declared as “No Open Waste” (NOW) Ward and “Walk of Dignity” was organized at Community Center Sector 23, Gurugram. Key participants in the event were Mr. Ravindra Yadav, Ward Councillor, Executive Engineer (Sanitation) Zone 2, Er. Saurabh Nayan from MCG and ward members. More than 175 citizens along with members of RWAs, school children, representatives from Sulabh and collection boys were present during the event. Ward Councillor and Executive Engineer addressed the gathering and some natural leaders shared their experiences in making the Ward as ’No Open Waste’ Ward. Around 50 champions were honored during the event. Best performers of the drawing competition organized for school students on the topic ‘Sanitation and our Environment’ were felicitated and oath was taken by everyone for sustainability.