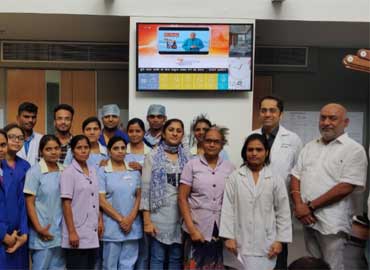 Feedback Foundation has been empaneled by Indore Municipal Corporation (IMC) as an agency for creating awareness in 3 zones of Indore Municipal Corporation for Solid Waste Management. Indore has been named the No. 1 cleanest city in India for the third time in the Swachh Survekshan 2019 and IMC is keen to scale up and sustain the momentum.  As part of this intervention, FF is conducting awareness and IEC (Information, Education and Communication) campaigns for mass mobilization of all waste generators. Capacity building workshops and SBM thematic drives are being organized. Citizens are being mobilized for segregation of waste at source and for making Indore Plastic free. Mr. Ajay Sinha, Chief Executive Officer of Feedback Foundation visited Urocare Hospital at Ward 37, Indore on 23rd October 2019. This hospital has become plastic free with the support of FF team. A green committee has been constituted in the hospital, which ensures that energy efficient initiatives are adopted in the campus. Mr. Sinha interacted with the doctors and hospital staff and guided them on using energy efficient technologies and shared some guidelines of Solid Waste Management Rules 2016, he spoke about Extended Producer Responsibility [EPR], under which producers are given a significant responsibility – financial and/or physical – for the treatment or disposal of post-consumer products. Hospital staff is very enthusiastic and is willing to adopt means to make the hospital greener and healthier.